Ever wonder what art shows are like from the artist’s perspective? If you have, great! My plan is to write a few quick blog posts about some of the shows I participated in this year.

It made sense to start with the first show of the year for me, the La Quinta Arts Festival. It also happens to currently be the #1 ranked show in the country by Sunshine Artist magazine and Art Fair Sourcebook. The rankings are kind of an informal thing, but everybody pays attention to them.

The show is held in the most beautiful outdoor art show venue you’re likely to see: A downtown park with palm trees, ponds, and waterfalls — framed by the Santa Rosa mountains. Super nice. One of the things I really like about La Quinta is that it’s a community-sponsored show (as opposed to shows put on by professional, more profit-driven promoters). Long before the artists start showing up, the show organizer and dozens of local volunteers work for days and weeks to pull the event together. Only when they have their ducks in a row can we artists start showing up. 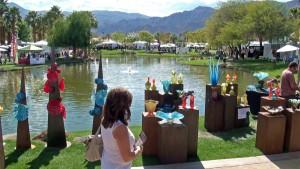 La Quinta runs Thursday through Sunday, making it one of the longer shows out there. We start our setup on the Tuesday before the show while most other artists show up on Wednesday. Tuesday things are pretty relaxed with volunteers using modified golf carts to help bring our display setup and sculpture from the van into the park. Every artist has an assigned spot to guide us as we build a temporary city with a population of several hundred souls. Very civilized!

Patrons start lining up at the gates on Thursday morning. Collectors looking to snag works from favored artists make up most of the initial rush. Then things settle down, with pretty consistent traffic throughout the event. Thursday tends to be the lightest day, which gives the artists who haven’t seen each other for a while a chance to catch up.

As a gated show that charges admission, security is never an issue for us at La Quinta. The only real concern is the ever-present threat of wind and dust storms, which can quickly destroy the unprepared booth. That’s why at La Quinta all artists are required to stake down their tents with 3’ of rebar at each corner.

Is La Quinta Worth it?

La Quinta is a percentage show: 20% of all artist sales go to support the show and other La Quinta Arts Foundation programs. There aren’t a lot of art fairs that charge a commission like this, but with the show’s ability to draw in patrons and the overall quality of the venue it’s a commission that’s well worth it.

After four days of hopefully brisk sales and interesting conversation with people from around the world, the show draws to a close at 5pm on Sunday. The clang of falling tent poles is the universal “show’s over” sound. La Quinta is unique for us in another way: Rather than rushing to tear down and get clear of the fairgrounds as soon as possible, we always take La Quinta slow and pack out on Monday. Again, very civilized!

Then it’s adios to southern California for another year. We’re back on the road for the 1,000-mile trip home. Another show season kicked off in style. 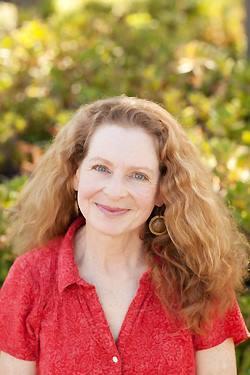